Steps In The Woods

This is an old one from the archive, mid 1990’s I think. Taken on a walk in Lathkil Dale  Derbyshire. I was quite surprised to see these steps abandoned in the woods, they were nicely covered in moss. It was quite dark and I thought the image would be underexposed, the lens was wide open (not good for the Vivitar) but the lovely Konica infrared film didn’t let me down.

I had the Olympus OM2sp CLA’d a few months back but after using it I noticed the selector lever for the exposure modes was loose and getting looser. So I sent the camera back and they adjusted it foc, and it’s now working as it should. Took it with me to Dams Spinney last week loaded with Ilford SFX 200 (expired 2009) with just one lens a Vivitar 19mm wide angle with a Red 25A filter attached to try and bring out some infrared effects, because the film was so expired I wasn’t sure what I would get. Developed the film in D76 stock solution and was pleasantly surprised by the results, good job as I have another 2 rolls in the egg compartment of the refrigerator. 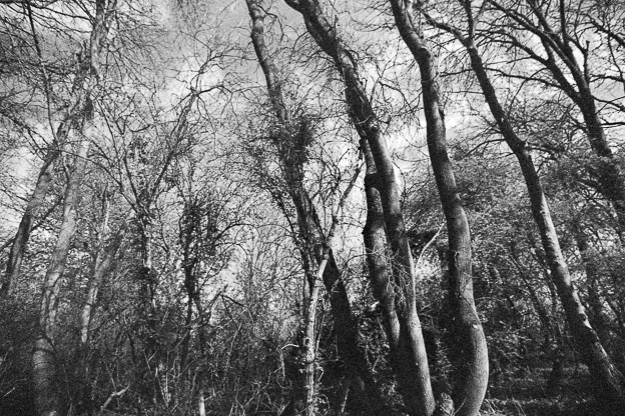 Next time I use this film I’ll try an R72 filter to get more of an infrared look. Really enjoyed using the Oly OM2sp, it has a lovely big viewfinder and spot metering, which I used for most of the film to help with the tricky lighting in the spinney. And best of all the negatives were really clean, I filtered all the chemicals before pouring into the developing tank and added a little bit of IPA (not beer) isopropyl alcohol to the final rinse.

Had my Olympus OM2sp serviced at Luton Camera Repair last month as the film wind on was misbehaving. They did a great job with it, replacing all the foam light seals, checking the electronics, and re tensioning the shutter. The camera felt really good so I took with me on a walk to the local arboretum. It was a really hot humid day, but there were some nice clouds about.

Path To The Arboretum

Most of the images were taken using 24mm Zuiko, and 50mm Zuiko lenses, using a Red or R72 Infrared filter

The film has given the Fir a bit of a surreal look. 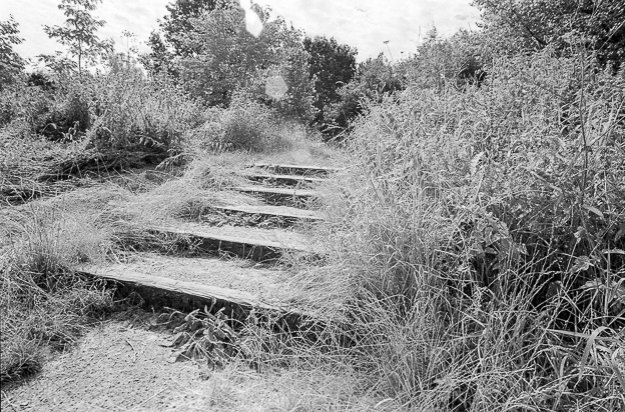 I’ll post some more shots from this roll over the next few days.

Managed to tidy up a few more images from the walk to the Arboretum on the 4th July. They are still a bit scratchy in places but it’s the best I could do without testing my patience to the limit. 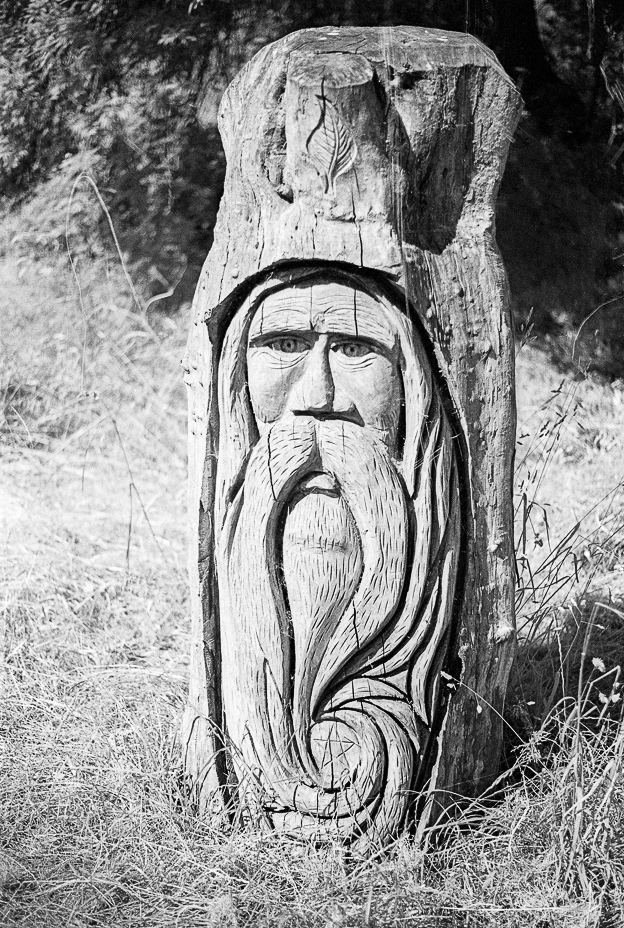 Used the almost opaque R72 filter for this one.

Even though this film is difficult handle (for me) when processing I really like the images it gives. I have some more shots to post from the bike ride last week.

I went out for a walk to the local arboretum on the 4th of July with my Olympus OM101 loaded with Rollei Superpan film. There were a couple of lenses I wanted to try out that had given me blank frames on a previous roll of film, I decided that it was probably the cheap AAA batteries that I had used so I bought some good quality Lithium cells, they worked fine. I used Red and R72 filters for the shots as Superpan has some infrared sensitivity.

It was a really hot bright day, hardly a cloud in the sky, would have been good to have had some clouds (never satisfied) When I arrived back at home I thought I would get the film into the developing tank ready for processing, letting it air dry overnight. That’s when the trouble started. Rollei Superpan is coated onto a thin base compared to most other films and I couldn’t get it to load onto the spiral, keep calm I kept saying to myself, the inside of the film changing bag was getting very humid, much like a Turkish bath which made things worse, eventually It went onto the spiral but I knew I had damaged the film.

Well this is what most of the frames looked like.

Straight out of scanner.

I cleaned up some of the frames the best I could in Lightroom which is very good for getting rid of a few  spots and blemishes. But because Lightroom allows you to amend or delete any of the corrections you have made with this amount it starts to use up stacks of memory and eventually almost stops, OK for the odd blemish on a digital sensor but not good for this much cleaning up.

The Path To The Arboretum 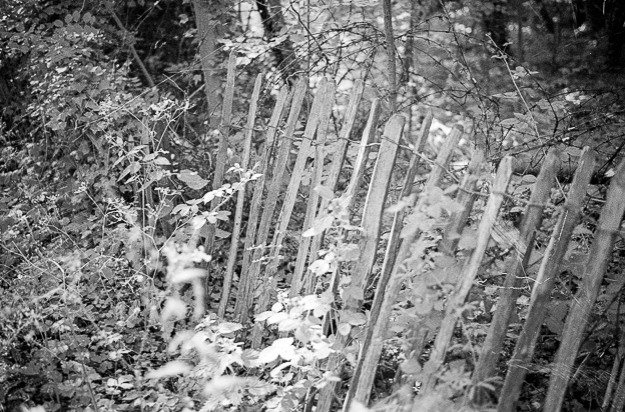 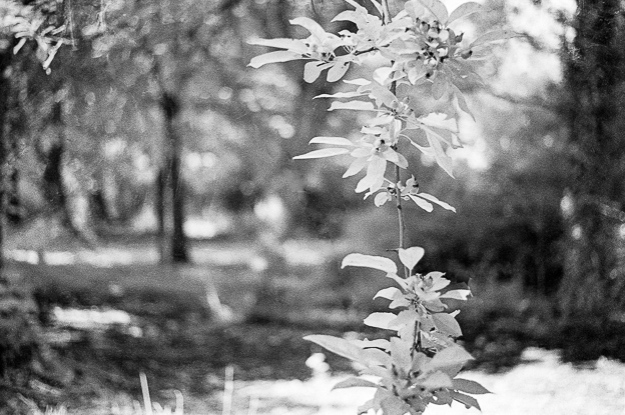 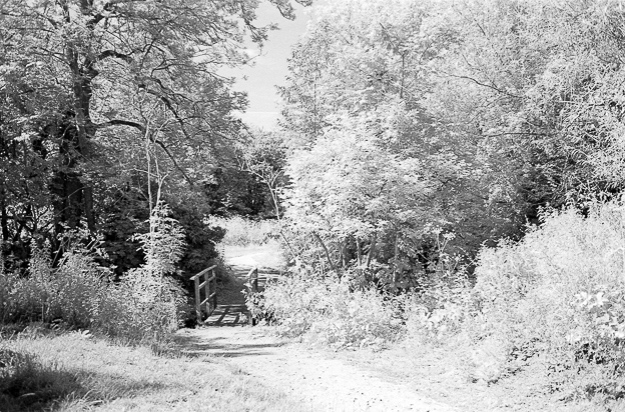 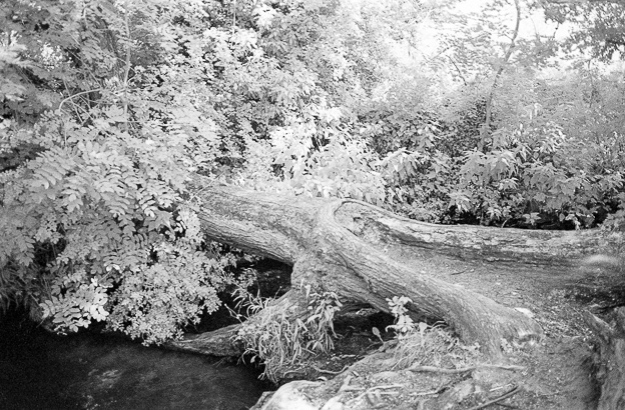 Fortunately I’m not easily discouraged and realising that the reels must be 20+ years old I ordered a new developing tank which arrived in less than 24hrs along with a couple more rolls of Rollei Superpan.

Looking through some old negatives I came across a Kodak Infrared film that I hadn’t scanned in. There were some problems with the negs, mainly underexposure, it was November, and it had snowed overnight, the previous day being bright and sunny. 1990 I think, when I took these images near Settle North Yorkshire. They were having a French week in the town with lots of French food and Cajun bands playing in the pubs. I was up there for a photo  weekend with former work friends. It brought back some really good memories.

Up On The Moors 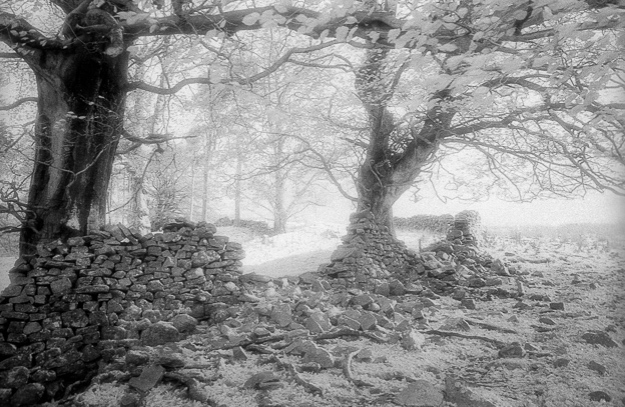 Even though Kodak HIE infrared could be difficult to use (you had to load/unload the film in total darkness and keep it in the film canister when not in the camera) I really liked some of the images it could produce.

This image came about by chance while searching for printer ink cartridges for my Epson. There were a couple of negative filing sheets hidden away in the cupboard, I must have put them in there because the negs had really bad drying marks and dust on them. So after a lot of work (and extreme patience) with the healing tool in Lightroom I managed to salvage this image. 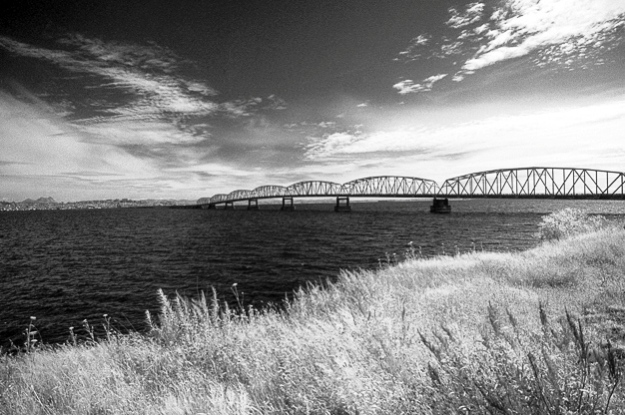 From my last road trip to the USA in the millennium year, how time flies. The two best bridges I have ever driven are this one and the Golden Gate.

Blackbird alarm calls got me up and out into the garden, I knew there was a nest in my Holly tree. With the weather being so poor earlier on this year I never managed to give the tree a good pruning, a painful process (for me that is), the leaves are very sharp. The cause of the alarm calls were my two cats who were mooching around the tree looking for somewhere out of the sun to settle down for a sleep.

So now I’m fretting for the well being of the Blackbird chicks. I’ve talked to the the cats about them but they weren’t impressed. My old Tomcat (Orlando) never bothered about birds too much, but the girls are fascinated by them.

Later on I decided to do a bit more sorting out of the spare bedroom/ex darkroom and came across a box of prints I had forgotten about. They are all from infrared film, and were very tricky to print, but scanned in well.

The ones above were taken on the way to Barmouth and Portmeirion. 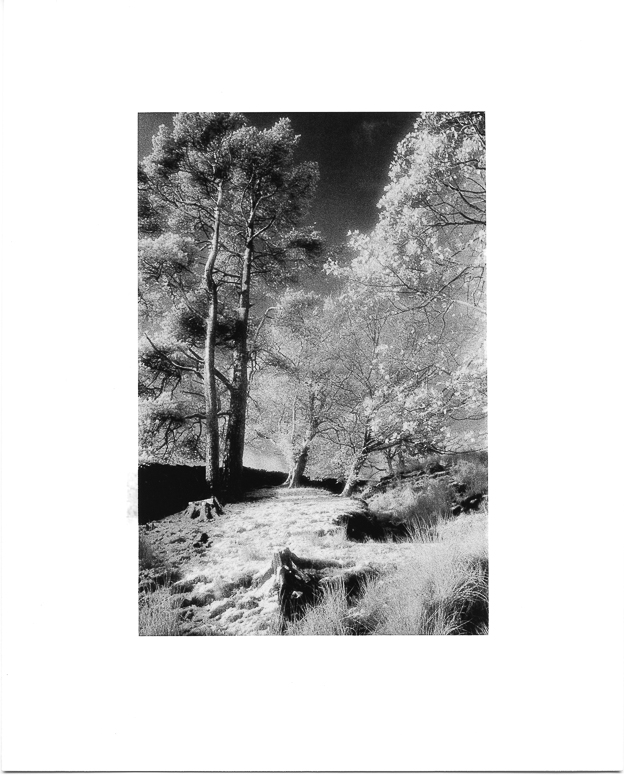 These were all taken on Kodak HIE infrared on my Olympus OM2n.

This was taken on Konica IR750 film on my Rolleiflex in 1993. Rundale Palace has been beautifully restored now.

A few more images from Friday. 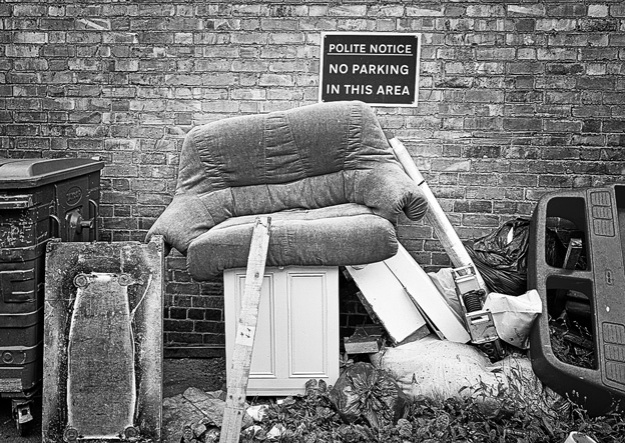 I cut through an alleyway and spotted this lovely jumble. 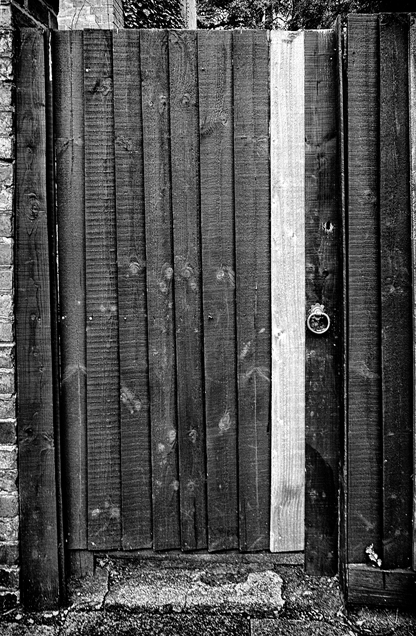 My Garden in infrared

It wasn’t really infrared weather on Friday but I had just found my Hoya R72 filter and thought I would give it a try. The sigma only goes up to 800asa so the exposure was quite long, 2 seconds at f5.6. I really must get that (Ailanthus altissima) Tree of Heaven  pruned before it gets there.

Needed to stay at home today to wait for a parcel to be delivered, so thought I would have a look through some of my old negatives. Hadn’t realised how many negs I had just filed away without doing anything with them. Found some from a holiday to Crete in 1995 taken on Konica IR750 on my Olympus OM2n, along with Kodachrome 64 these are the two films I miss the most. On with the desktop Pc and scanner, music required so put on Steve Miller’s Bingo album, just the job. 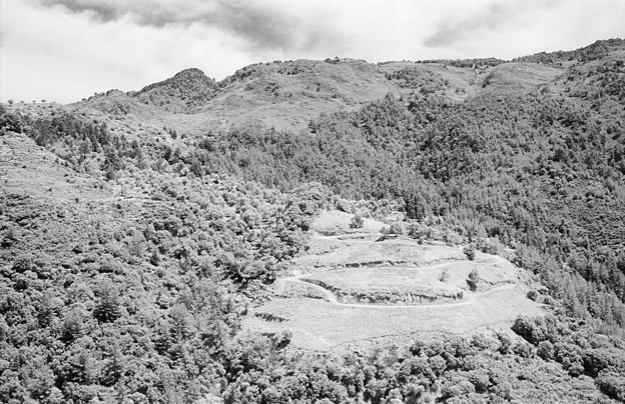 According to my label on the neg bag I developed the film in Kodak D76, and looking at the images the lenses would have been Zuiko 24mm f2.8 and Zuiko 135mm f3.5.