This week I thought it was about time I took a look at the of tomb King Richard 111 in our cathedral. I can’t remember the last time I actually went inside the building. I’m glad I did as they have done a fantastic job with the tomb and the tour guides were really helpful and knowledgable.

It was a beautiful morning so up early and out for a walk.

There was a partial (very Partial) eclipse of the sun the light was very strange and ethereal, birds began the dawn chorus over again. I walked to the nearest park and people were setting up cameras and tripods.

Another event is taking place over the weekend in the town and surrounding county. 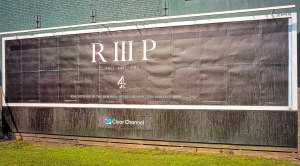 It’s the reburial of the remains of King Richard 111 in the cathedral.

TV crews setting up and last minute preparations going on.

I carried on with the walk, there were a few doors I wanted to photograph, then on down to the canal.

Some early blossom was out, really felt like spring is in the air.

And a canal boat was on it’s way through the lock.

If it carries on like this I can feel a bicycle ride coming on.